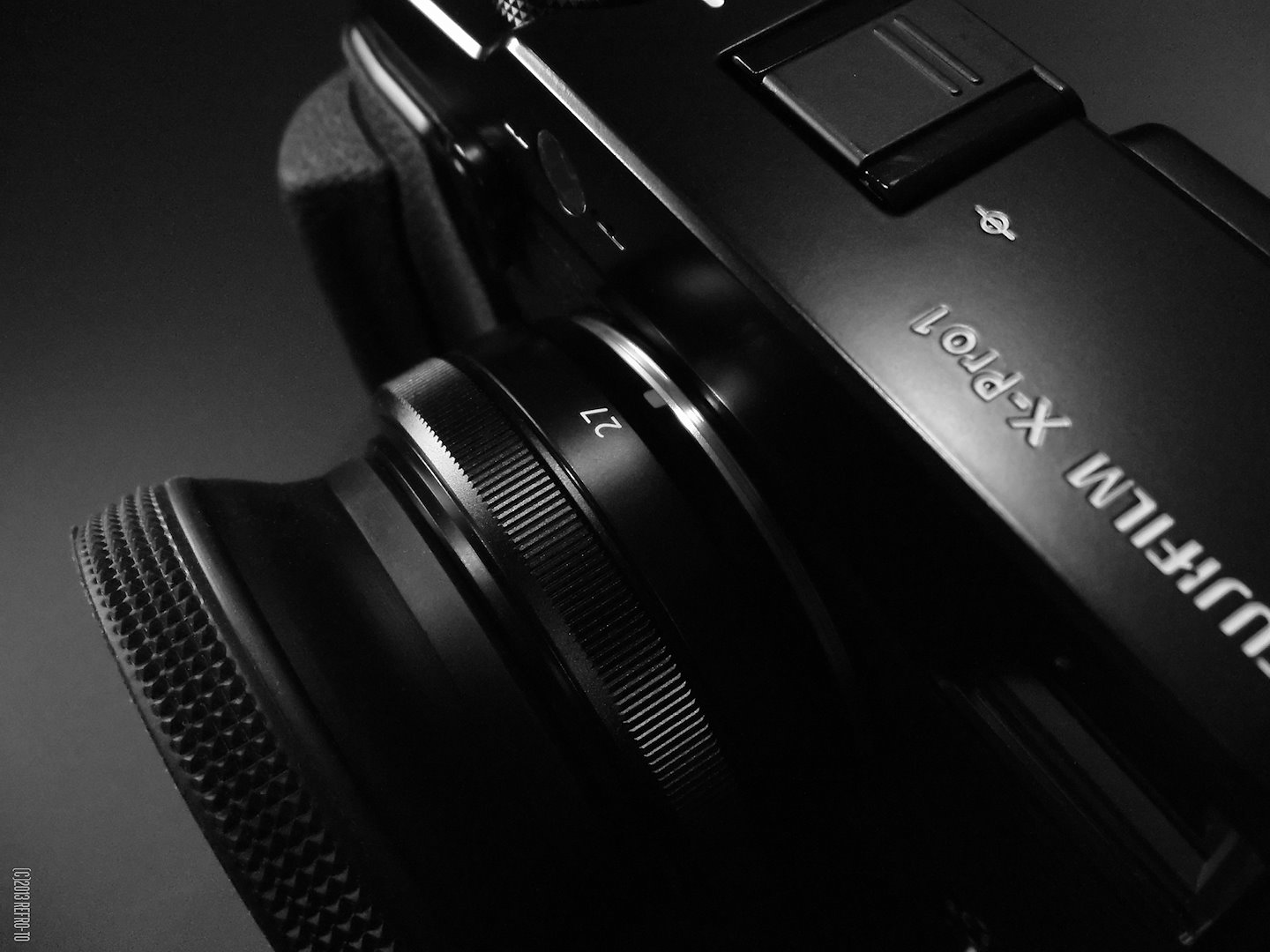 what a really lucky guy I am…

a few days ago I just walked in the local photostore to pick up some equipment for my loewe photobag and while paying couldn’t help asking for a delivering date of the fujinon xf27 – the answer came immediate and really unexpected: “yes, we do have one in stock since yesterday!”  BONG :-))

after testing af speed and minimal focus distance with a few shots inside the store it took me another hour of thinking and googling, but then returned back and bought the lens.

why did I hesitate? well, I’ve not been quite sure, if the lens was worth buying or if it’s better to wait for the xf23 prime?
on the pro side, since I’m not owning a prime lens near the 35mm ff-format, it definitely does fit well in my existing xf-collection (14, 18-55, 60, 55-200). besides that, I assumed, that I can benefit from the pancake size, offering low weight and a “stealth mode”-design due its smallness, which for sure is also practicable for street-photography.

the xf23 prime on the other hand will offer two stops more – from f2.8 down to f1.4 – and will certainly play in it’s own optical class, providing a different – higher level – playground for us photographers.
for those now asking: what about the xf35? I can respond, that I personally prefer the 41mm focal length of the xf27 over the 53mm of the xf35, seeing the latter already more at the beginning of tele. the fact that the xf27 will therefore allow me easier picture composition in every day shooting, destroyed my last doubts.

so what can a proud owner of this lens tell you?
interestingly this lens carries a “made in china”-tag, despite to its other brothers and sisters. don’t bother a second, quality feeling is alright, the focus ring is nicly damped and still feels like being made of metal – is it metal? think so.
there are plenty of other sites available offering technical data and solid reviews for the lens. what I can remember – and what impressed me – was the more or less constant (center) sharpness of the lens up to f11, so there’s no real sweetspot like on the other xf-lenses. sharpness in general is satisfying for me (with a sharpness setting +1 on the x-pro), but not more (compared to the other xf lenses). however, I’m not too sensible in this area – I normally just increase the local contrast a lttle bit during post processing, so modern software allows me easily to adjust sharpness up to my needs and up to now I seldom felt the need to readjust sharpness on pictures taken with the xf27.

aperture handling needed a little bit getting used to it. interesting to see that I needed a few hours of “re-learning” to set the aperture via the command dial. although I did so for several years with my nikon dslr, my fingers always twiddled on the lens itself.. . nothing really serious, just a personal statement, but it shows quite well, how intuitive the good old fashioned manual aperture ring is and how glad I am, that fuji implemented them on their xf lenses.
also, the left hand needs some regripping during shooting with the xf27 – while normally my left hand supports the lens underneath I now use my forefinger and thumb to bracket the x-pro on top and bottom, since the lens is simply too small to lie comfortably on my hand.

af speed? really fast (in fuji terms) and well, nothing to worry about. it really might be the fastest xf lens s far, but that’s maybe my subjective impression. when it locks the picture, it’s mostly sharp and also showed no hunting so far in low light conditions. af-motor noise is quite loud with a strange, rather scratchy sound.

macro capabilities are moderate, mainly due to the minimal focal distance of about 30 cm. I wish it would be half the distance for such a small lense – why can I do that with the superzooms of cheap compact cameras costing less than half the price of the xf27? it’s a mystery to me, don’t think that there are technical reasons.

after shooting a few days with the lens I can say it fits neatly in fuji’s – and my personal – xf portfolio. it’s not *the* winner compared to other lenses – alone impossible only because of the hefty price tag of €440 – but be fair: that’s not what it was designed for and maybe it adds some marginal return which other xfs lack?
considering the current delivery problems of fujinon xf lenses, I think I took the right decision, and the xf27 will be useful for me in daily shooting situations – future will show.. .

update:
so far the xf27 showed less sensitvity for flares in sunlight conditions, but for convenience I added an extensable, foldable schneider lens hood as well as an uv-filter sole for protection reasons. the bigger diameter of the rubber ring and increase in length also brings an additional benefit: it adds just the necessary millimeters in length to enable me again to hold the x-pro 1 as I’m used to it with all the other lenses – supporting the lens underneath with 3 fingers of my left hand brings back the solid feeling and one stop in low light shooting. plus: it really looks nice! now the lens shows just the right size for an ergonomic operation with the x-pro 1 – wonderful! 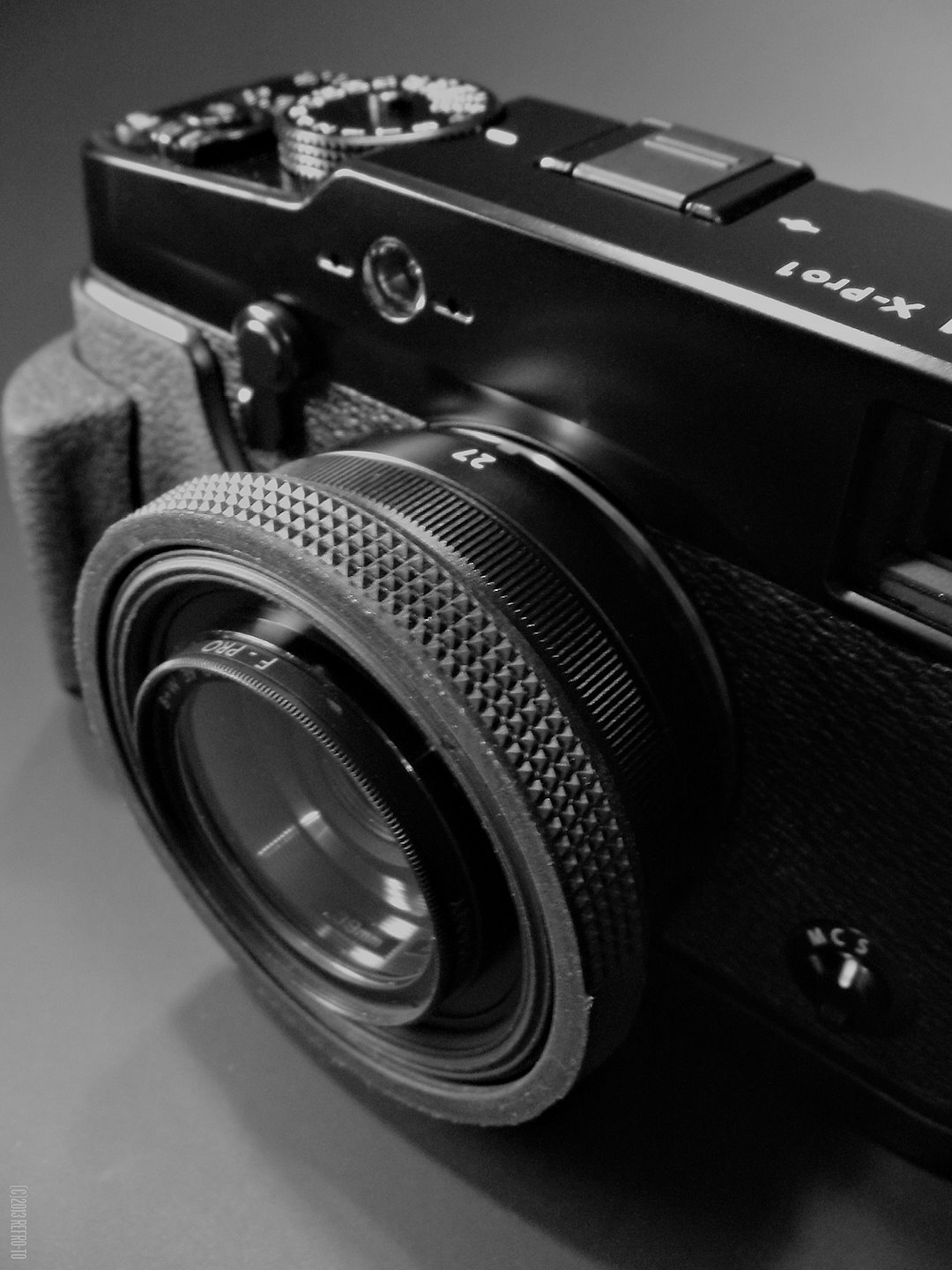 the sample photos were taken while visiting the third linzer höhenrausch (thrill of the heights) named “the art of towers” – an summer installation / exhibition on top of the roof of buildings located in the upper ausrian museum quarter near the main shooping road in the heart of the city and being an well visited attraction since the first exhibiton dated back in 2009, where linz has been european capital of culture. 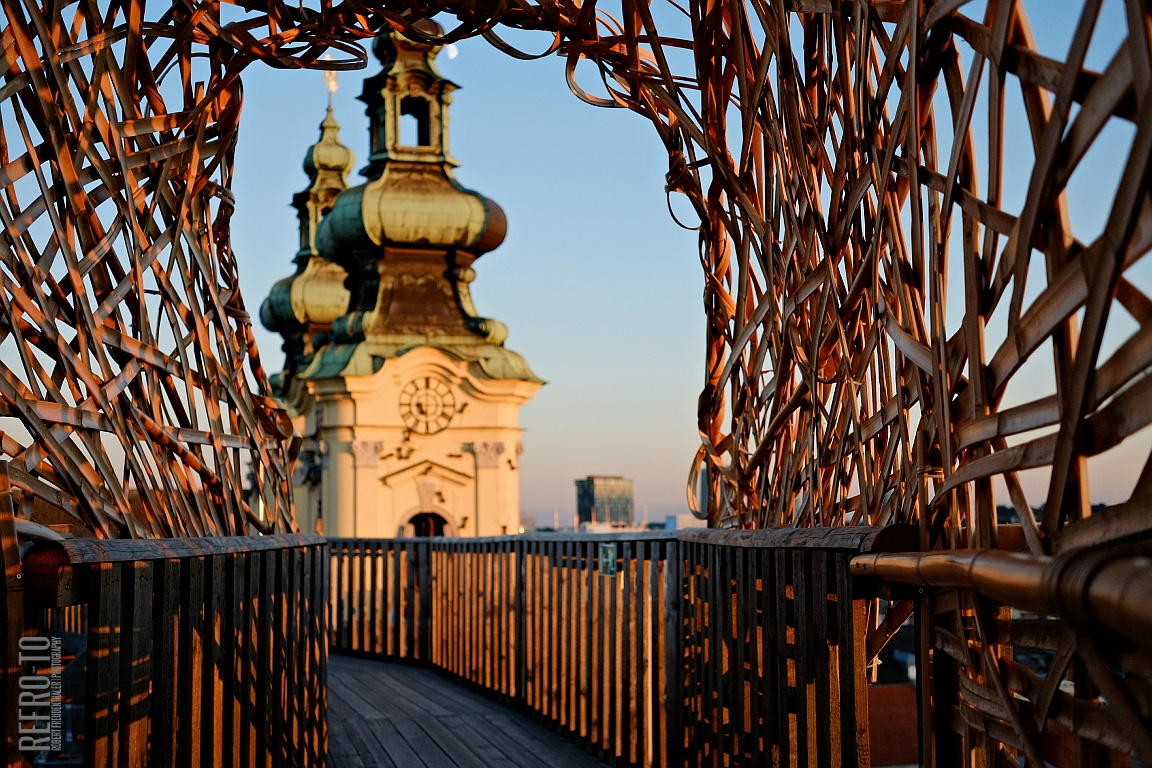 enjoy the pics here in the gallery!

ps: just need to mention, that 3 pictures towards the end of my photo essay were taken with the xf55-200..  . did you notice any difference? I don’t think so ;-) 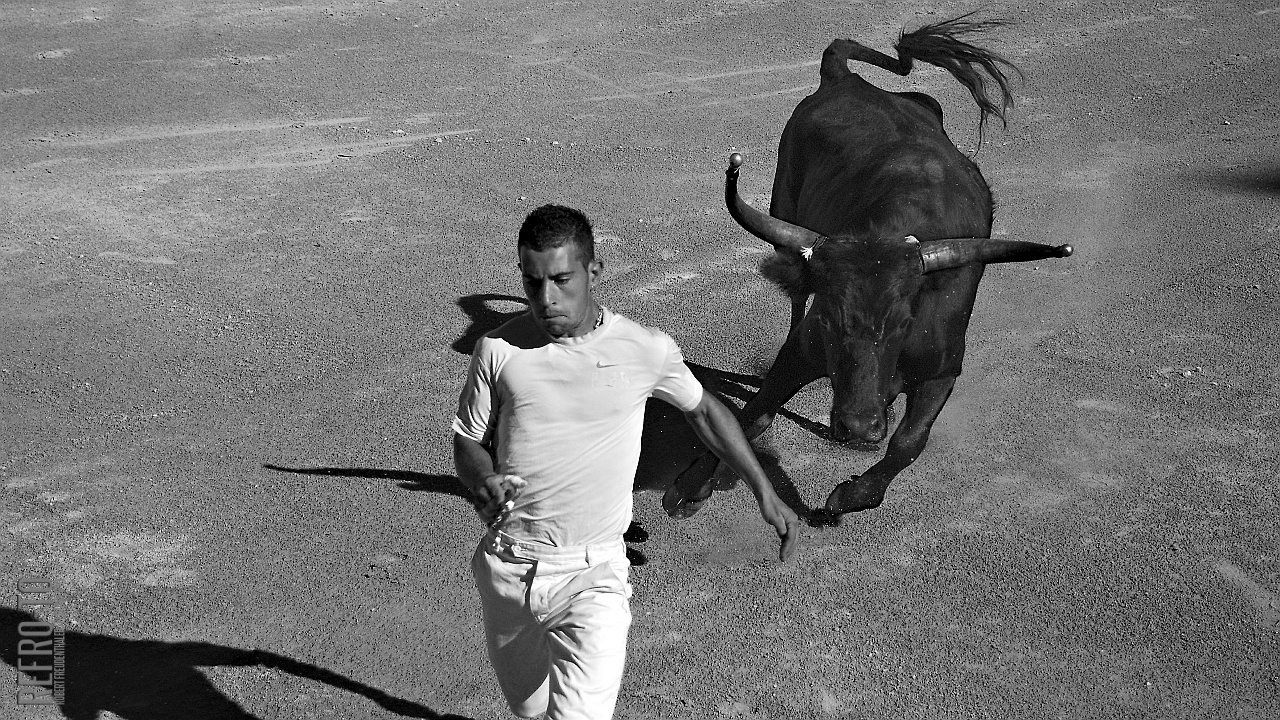 In Event, Holiday, Nikon D80 by admin / 20130812 / Comments are closed
i regard the bloody spanish bullfight as really  disgusting since we once watched young torreros crucifiying the bull. besides that it came clear to my mind, that the bull has no chance at all, it is far away from being a fight between men and animal at eye level.

rescue of our hearts and mood came from watching a course camarquaises in a small village named fontvieilles, where the real hero of the unbloody fight is the bull, which always keeps his life:-)

goal of game is, that the fightors – the razeteurs – collect tessels, which are hidden between the bulls horns. 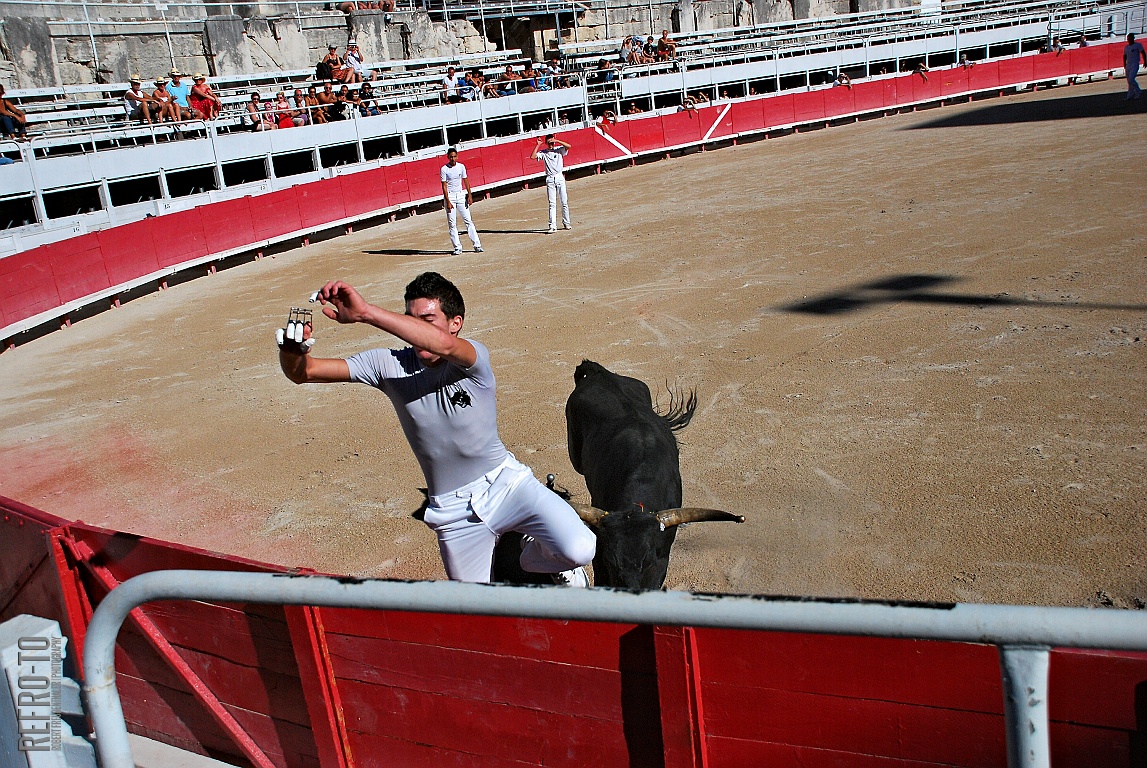 winner is the one, who collects the most of the so called cocardes (the tessels) and so wins beside the money also the heart of the local women.the following pictures were taken during our 2012 summer holiday in south france in the magnificent amphiteatre of arles – cultural heritage of the unesco with a capacity for 25000 spectators.